Friday night was a first for TEDxPeachtree – we held our first ever live-lit event! The first (hopefully annual) TEDxPeachtreeSalon Poetry Slam was held at the Atlanta landmark Manuel’s Tavern.

We were overwhelmed with the support we received from the Atlanta creative community, and proud to have such spectacular talent on stage. Ten excellent local poets battled it out in front of a full house.

We kicked off the event with powerful TED talk by Lee Mokobe on what it feels like to be transgender. (If you haven’t already seen it, I would highly recommend taking five minutes to watch)

The event continued with our host Jason Mallory, and the sacrificial poet (a slam tradition) Zack Linley.

Then it was time for the competition to begin. The ten poets represented all ages, experience levels, backgrounds and life experiences. Each poet spoke with his/her own unique style and voice. They covered themes spanning love (for yourself, for others, and for family), hate (racism, bullying, and injustice) and topics ranging from ADHD to how to tell a girl you like her.

The field of ten was narrowed to five after the first round. The poets were given three minutes to perform, and we ended up with a tie heading into the finals. Instead of the predicted two person face off, three poets performed for a chance to win a spot on the TEDxPeachtree stage: Adan Bean, Ashley Haze, and Theresa Davis.

It was a very close race, but after a very moving poem about love and her relationship with her son, Theresa Davis was crowned the first ever TEDxPeachtreeSalon Slam Champion.

Overall, it was an incredible event thanks to our wonderful volunteer team, the judges, the host, Manuel’s Tavern, the TEDxPeacthree board, and of course the delightfully talented poets.

On November 8, 2013, TEDxPeachtree successfully catalyzed a capacity crowd of more than 500 attendees at the historic Buckhead Theatre with 17 informative talks categorized into four sessions. All 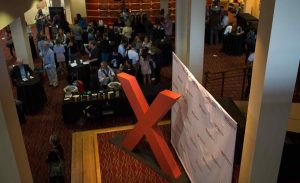 The 9th edition of TEDxPeachtree sold out weeks before Friday, October 6, when over 600 people eagerly filled Atlanta’s Rialto Center for the Arts to

Illuminated: The Brilliance of TEDxPeachtree 2014

The theme of this year’s TEDxPeachtree was “illuminate,” but it is nearly impossible to use one word to describe the October 17 gathering. Brainwave-derived art, personalized