The 9th edition of TEDxPeachtree sold out weeks before Friday, October 6, when over 600 people eagerly filled Atlanta’s Rialto Center for the Arts to listen to this year’s inspiring speakers. Hundreds more across the country joined in through a free live webcast. All came to listen, to think, and to dive Beneath the Surface.

That was the theme of the 2017 TEDxPeachtree conference: to look at all ideas and all possibilities for what you can’t see; not just the obvious, not what’s already accepted, and not what most people expect. To look beneath.

The conference was organized into four sessions, with each speaker using the theme to help us ultimately gain a deeper understanding of the world. As in years past, the conference also featured an “X-Zone” with activities crafted by local partners to bring attendees together outside of the presentations. By popular demand, Georgia’s technology incubator the Advanced Technology Development Center once again presented portfolio companies at the ATDC Innovation Studio in the center’s lower level.

Nine months in the making, each flagship TEDxPeachtree conference brings together dedicated volunteers from across Atlanta to create one special, memorable day. Among the very first TEDx events to be organized in the world in 2009, TEDxPeachtree has come to be known as a “pioneer” TEDx group among the 10,000 or so other TEDx group worldwide!

TEDxPeachtree is a non-profit organization powered by an all-volunteer crew. People of all backgrounds are attracted to the initiative, many of them volunteering year after year. There are no paid, full-time staff members. Even our emcees volunteer their time and talents.

(PS, If you’re interested in volunteering at TEDxPeachtree’s year-round discussion events, aka salons, check out the TEDxPeachtree Web site for volunteer opportunities!)

If you missed TEDxPeachtree 2017 and couldn’t catch it on the livestream, check out our social media channels. Sign up here for an email update when speaker videos go up on the TEDx Global YouTube channel. Until then, here’s a quick recap of each session’s highlights. [Initial batch of conference photos are live here.]

SESSION 1: LOOK DEEPER
Tejas Athni (neuroscience explorer) started off the day by sharing highlights of his research on natural compounds that could cure cancer. The high school senior – yes, he’s still in high school – had everyone smiling as he talked about his trials and tribulations as a student researcher working at Detroit’s Karmanos Cancer Institute. After listening, we’re not too surprised that his research is being submitted to professional peer-reviewed journals.

Krzysztof Czaja (neuroscientist) talked about a subject that troubles millions of us – obesity. From his presentation, we gained a greater understanding of the role the gut-brain connection plays in gaining weight, particularly regarding added sugar. His pursuit of finding non-surgical ways to overcome obesity is encouraging for everyone struggling with significant weight gain. Rock on, Krzysztof!

Siana Altiise (sensory artist) demonstrated how she transformed her extrasensory condition – a perceptual phenomenon known as synesthesia – into a life filled with vivid musical compositions. She sees colors, shapes, and textures that most of us can’t and she uses them as inspiration for her music, which she performed for the crowd in what became an extraordinary sensory experience.

Cara Turano Snow (connector) showed us how her family’s quirky tradition of picking up change here and there proves the power of the humble penny. It was something her mom told them (sound like your mom?) when they were little. Snow has convinced friends and co-workers to do it, too. Last year, they were able to donate $1,200 to various neighborhood efforts to end homelessness. Pennies add up!

A video of a global community TED talk by artist Hetain Patel toyed with preconceptions of identity and authenticity to ask “Who am I? Think again.” He challenged us to think beyond surface appearances, like race, gender and size. The talk was originally presented in 2013 at TED Edinburgh, Scotland.

SESSION 2: SECOND CHANCES
Rickey Bevington (journalist) believes the connection between the news media and the public is broken and it’s up to the public to fix it She explained how we can do that step by step and why we should. Later in the day, people were still talking about her presentation, which showed us why we deserve information that helps us make better sense of the world around us.

Louise Wasilewski (criminal justice reformer, engineer) opened our eyes to the challenges ex-offenders face when they leave prison and re-enter the outside world. They get lost in a society that has moved ahead. Nearly two-thirds of them end up back in prison within three years. Wasilewski has developed a system using technology, communications and coordination to fight recidivism here in Georgia. Other states are taking notice.

Jason Martin (public education activist) takes “thinking outside the box” to a different level – “teaching outside the box.” Watching the video of this Georgia teacher’s STE(A)M Truck being driven to bring science, technology, engineering, art and math education to every child wherever they live was an inspiration. Can we clone this guy?

Susan Sparks (pastor, comedian, attorney) made us laugh, and think, and think! After listening to Sparks – America’s only female comedian with a pulpit – it was hard to argue with her belief that laughter can bring peace to the world. Hot off her popular Laugh In Peace Tour, the senior pastor at NYC’s Madison Avenue Baptist Church, hopes that laughter will help us see each other and the world in new and different ways. It begins with one joke at a time.

In a video of a global community TED talk by architect Takaharu Tezuka he walks us through his design process that lets kids be kids in the “the world’s cutest kindergarten.”

SESSION 3: STEP FORWARD
Bill Nussey (technologist, clean energy advocate) showed us how the U.S.’ current U.S. electrical grid – outdated by decades – can be replaced by local energy. A cleaner, cheaper and more secure solution, local energy represents the unstoppable economic force of a better product at a better price. Nussey asked, “What kind of energy do you want in your backyard?”

Justin Daniels (attorney, cyberspace connector) asked us to temporarily exit the innovation superhighway and consider the long-term consequences of all this innovation on our security. Daniels stressed the delicate balance between innovation and security and how that intersection – cybersecurity – is the most important challenge in our world today. He said we should ask what privacy protection and on-going security is built into a device before we buy it.

Jasmine Crowe (anti-hunger activist, entrepreneur) called us to action to eradicate hunger. Moved by a close friend’s struggle with hunger, Crowe has dedicated the last several years to fighting hunger. From creating Sunday Soul events (good meals with old school music) to using technology to distribute excess food from restaurants, she says it’s a question of logistics, not scarcity.

James Beckerman (cardiologist) made us look at self-help differently: consider how doing good as a team makes you as an individual feel better. He asked us to imagine all the untapped opportunities we have to help one another and feel better together? Charity is a renewable resource. The more you give, the more you get, and your self will find help where you least expect it.

A video of electric-pop duo Sofi Tukker’s performance at the March 2017 TED Talk in New York City got people out of their seats. “Awoo!”

SESSION 4: BEYOND BOXES
Lonnie Johnson (inventor) got us to look at how we can transform the way the world generates and stores energy. He aims to dramatically improve the efficiency of converting heat into energy, leaving a softer footprint where we tread and demonstrated how this invention would work on stage.

Erich Netherton (sound designer) demonstrated how he uses rhythms to craft original sounds for a variety of projects, including feature films, video games, commercials, and corporate videos. He showed us how he can pull unexpected sounds and textures to create original sound synthesis using his own invention, the Netherbox.

Juana Mendenhall (biochemical engineer) told how a sports injury in her mid-20’s led to her life’s mission to develop a preventive therapy, which will regenerate cartilage in the knee. She’s leading the way with her cutting-edge therapeutic gel scaffold technology and believes the future of knee repair – without evasive procedures – is here.

Matt Meister (research engineer) began his talk, asking, “Are we alone? Is there a place with life, other than Earth?” Meister looks to the sea – actually the ocean floor under Antarctica – to answer those questions. He showed a picture of Icefin, an exploratory autonomous submarine he helped design and build to explore the floor 500 meters below the surface. You’ll have to watch his video to learn what he discovered.

A video of a global community TED talk by TED Senior Fellow and artist Aparna Rao charmed the audience. It featured her works in progress – humorous, interactive art pieces that occupy the digital space. The video was originally presented in 2011 at TED Edinburgh, Scotland.

Siana Altiise closed out 2017 TEDxPeachtree with her signature extra-sensory musical performance. It was a mesmerizing end to a thought-provoking day. Finally, saying goodbye to new friends, attendees left to share their new inspirations and great ideas with family, friends and community.

We so appreciate our incredible speakers, volunteers, partners and, of course, our amazing attendees — not to mention the livestream viewers in more than 600 locations (including every East Coast state in the U.S., California, Colorado, Arizona, Nevada as well as Canada, Germany, Italy, the Netherlands, Norway, Brazil, Singapore, Saudi Arabia and Greece). Thank you for joining us.

Why I bring my team to TEDxPeachtree

I am a firm believer in lifelong learning as a way to constantly evolve ourselves by feeding our minds with new ideas and experiences. TED 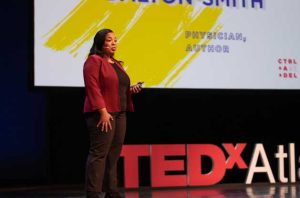 We chatted with Dr. Saundra Dalton-Smith to get to know one of our CTRL+ALT+DEL speakers. What are you currently working on and what excites you